How Safe is Your Deck?

May is Deck Safety Month

Summer time is fast approaching and more and more, homeowners are getting outside and entertaining on their decks, seeing it as an extension of the living space to the outdoors. Consequently the number of deck and railing failureshas increased at an alarming rate. The North American Deck and Railing Association, (NADRA), states that between 2000 and 2008, there were at least 30 deaths reported as a direct result of deck collapses, and more than 75 percent of people on a deck when it collapses are injured or killed.

"The deck is the most dangerous part of the house," says Don Bender, director of the Wood Materials and Engineering Laboratory at Washington State University.

"Decks cause more injuries and loss of life than any other part of the house structure. Except for hurricanes and tornadoes, more injuries may be connected to deck failures than all other wood building components and loading cases combined."

Click on the Image Above for More Info on Inspecting Your Deck for Safety! 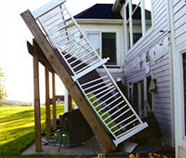 Inspection For Your Protection

The NADRA estimates that currently there are more than 40 million decks in the United States that are more than 20 years old, making it even more important for an annual inspection by a qualified home inspector or construction professional.

The Team at Company Name